“Mommy, you have a baby in your belly,” my 3-yr old son told me one day when I picked him up from school. I laughed and told him how cute he was. A few days later, I found out we were expecting our second child.

Logan was so excited at the thought of being a big brother. He couldn’t wait to meet the new baby, share his toys, and have someone at home to play with. I told him how awesome it was to have siblings, sharing growing up stories with him about my sisters and brothers. I couldn’t wait to see the memories they would build throughout the years.

Honestly though, I wasn’t sure how he would transition once his new brother arrived. I’d read and heard about regression that might happen when you bring home a new baby and new feelings of confusion, jealousy, and even anger that may arise. So I did what I could to prepare him to meet this new person who would soon be filling our home with laughter, cries, screams and smiles. We read books about being a big brother, sorted through old clothes that were once his that now his brother would soon wear, and talked about what it would be like to have a brother.

Shortly before my due date, I took Logan shopping to choose a toy to give his new brother when he arrived. He chose a small car rattle that made noises when shaken. We found a little bag, placed the toy inside, and then put the bag in the car to have at the hospital when the time came.

I also wanted to do something special for Logan for after the baby arrived. I researched the Internet for ideas about ways to introduce new babies to their siblings and found a great one for a ‘Big Brother Bag’ – a bag that the new baby “gives” to their sibling after they are born.

I filled this bag with lots of goodies – a coloring book, new cars, a book about being a big brother, snacks, a puzzle, and a small art kit I’d sewn – all things to keep him busy at the hospital. I hid the bag in our closet for a few weeks hoping Logan wouldn’t find it before it was time. Fortunately, he didn’t! 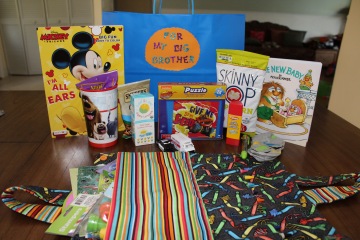 All the goodies in the bag!

Once Cameron arrived, Logan was the first one (after Daddy of course) tomeet him. He quietly walked into the hospital room, unsure of what was going on or why he was there. He curled in my lap and seemed to finally make the connection that the little baby that used to be in my belly was now sleeping in a tiny little bed next to mine. A few minutes later,he leaned over to see the baby and I could see excitement and love shine through his eyes and in his smile. He took the bag with the little car toy in it and showed it to Cameron and then tucked it away for when Cameron got a little bigger and could play with it. I told him Cameron also brought him a little gift and handed him the bag. He quickly ripped everything open and busily occupied himself with all the fun gifts his new little brother had brought him.

What a fun way this was to make an older sibling feel special during this very memorable family moment. If you have more than one child, what are some things you did that made your older child(ren) feel special when you had a baby? 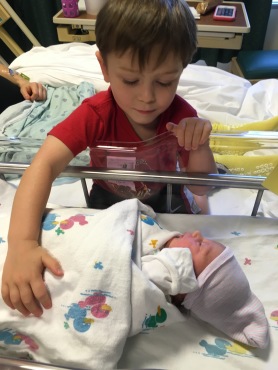